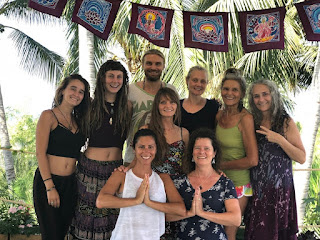 "The One World Wellness retreat has been a life changing experience for me. I booked with the intention of learning to meditate and got so much more. Kristin and Tanner are fantastic. Their incredibly positive healing energy and deep understanding of holistic wellness has enhanced my life in ways I will forever be grateful for. They were able to offer support, information, guidance and everything in between without expectations or trying to push anyone into doing anything they were not comfortable with or ready for. Not only was it a transforming experience, but also an awesome vacation because they facilitated that. The only negative thing I have to say about the entire experience is that Kristin and Tanner live in Canada, which is really far away from Utah. They are the kind of people you meet and hope to keep in your life forever. If you are ready to find yourself and get to know yourself on an entirely new level you should definitely book with One World Wellness. We might even run into each other because this is definitely not my last retreat with One World Wellness. " - Jess, Utah, USA - Back to Basics Retreat

Our epic winter/spring 2018 Mexican yoga and wellness retreat adventure has come to a close. We have learned so many volumes of things that it will likely take some time to allow it all to sink in. Overall we will simply call this venture a wild success. Just, perhaps, not in the same ways we could have EVER imagined.

Never before in a 6 month period of my life had I met so many humans on similar paths and journeys. Never before had I met so many magical people from all around the globe. Never had I been pushed so close to the edge of my own mental and physical capabilities, and all while in a leadership position. Never had I had a tooth pulled from my mouth before this Mexico trip (a 2012 root canal needed to be taken out). Never have I had a partner by my side through the wild crashing waves of it all and at the closing ceremony, we are stronger and happier as a couple and as a team than ever before. 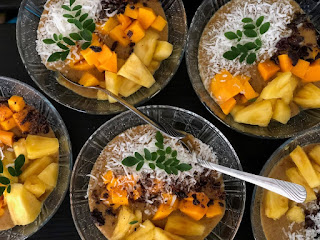 Never before had I received *and accepted with grace* so many thoughtful, loving words and gifts, tangible and intangible. Never before had I given and received so many hugs and sweet soul-witnessing smiles. Never before had I taught so many yoga classes and guided and supported so many busy minds into deeper surrender and inner peace (especially my own). Never before had I eaten so much tropical fruit (mostly mangoes, avocados and coconuts) or come into contact with so many insects and geckos...in my bedroom. Geckos poop SO much. We even found a gecko skeleton under our suitcase on moving day. Yikes. 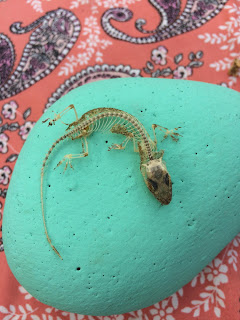 Never before had I spoken so much broken Spanish and been able to laugh my way through it all. Never had I rented an entire retreat center that I had never laid eyes or feet upon prior to our arrival day. *HUGE lessons there*
Never before had I sat around so many beautiful circles and campfires and witnessed the releasing of old beliefs, blockages and patterns that were smothering the magic within each person (myself included).

Never, EVER before have I felt so strong in my own heart and soul.

Never before had I enjoyed my time playing in the turquoise ocean waves so deeply. Never before had I spent time in the tropics with so many friends who are dear to me and who left their routines to come and play with us. To laugh and cry (and SWEAAAAAT) with us.

Never before had I offered such incredibly powerful Reiki sessions with my partner to so many willing and grateful recipients. Wow. Just wow. We will now be offering this as part of our magical, yummy menu!
Never before had we gotten to hang out with the majestic Theobroma Cacao Trees in the forests of Mexico AND share their amazingly tasty fruits with lots of grateful taste buds. 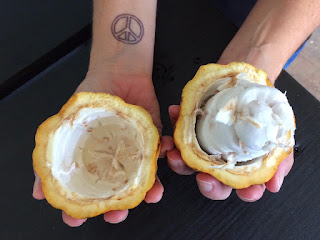 Never before had I experienced an earthquake swaying the foundation below me while lying upon the earth next to a river...during an Ayahuasca ceremony. Then all of the harmless aftershocks at the retreat center that literally shook me to the core all week and resulted in no sleep and a constant feeling of tremors day and night. 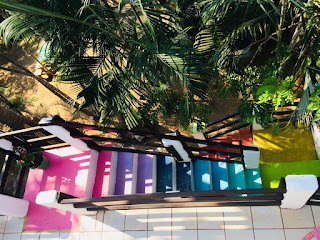 Never before did that get coupled with our next door neighbor moving in with a pack of riled up dogs who barked day and night. Which resulted in someone poisoning some of them. Which resulted in not only dead dogs but a dead cat of the retreat owner that went missing and a dead iguana rotting under our tiny casa. That week was the pinnacle of the universal testing! Finally that phase seemed to come to a close another week later with a midnight pick-axe sound below our bedroom window while the man buried yet another deceased doggy. What a mess THAT all was. (Yup, it really happened.) Hopefully NEVER again. 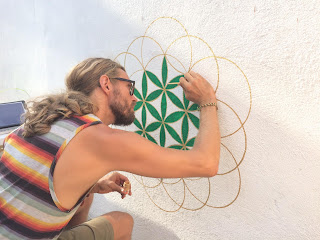 Never before had I given and received so many smudgings. SO MANY. Never had I seen Tanner paint perfect sacred art on a wall. Never had I watched a tarantula cross the road. Never before had I heard a daily orchestra of dozens of roosters- EVERY. Damn. Morning. Way before the sun was even thinking about rising. Never before have I felt so strongly that I never again need a pet dog. Or cat. I had about 99 of them in the neighbourhood all winter and spring. Stretch that out and it will last one a lifetime or more.

Never had I hired two vegan cooks who both said “I don’t really cook. Especially vegan. But I’ll learn!” And never before had I seen such a rapid transformation of two non-cooks into magical food art wizards. Um...see for yourself. All of our kitchen helpers were superheros. There is NO way we could have done all of this without you all. 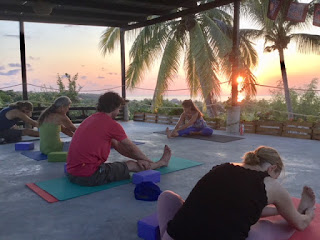 Never before now have I felt such a strong push in the direction of my deepest purpose and the blissful flapping of my wings with great anticipation of what might be coming next.

Never before have I felt like I accomplished with flying colors such a massively challenging assignment from the universe. A clear beginning and a clear end. Checkmark. Where will One World Wellness Retreats in Canada happen? We are ready for our summer assignment! Bring. It. On. WhamO! (Oh, and in English please.) 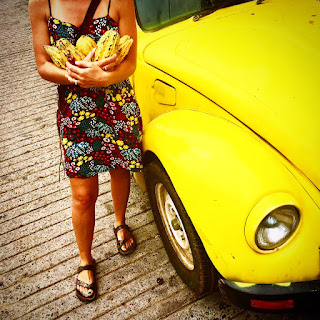 PS. Mexico we LOVE you and all of your mysterious and hilarious humor and powerful yet loving lessons! See you soon.  Until then...Adios. Also, we are so grateful to everyone who was the behind-the-scenes support team for US. Wow. What an amazing web of people we have in our lives. xoxoxo 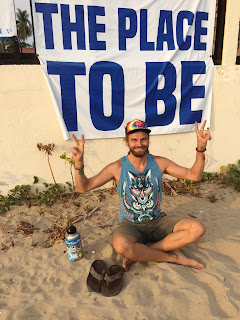