OM is Where the Heart Is 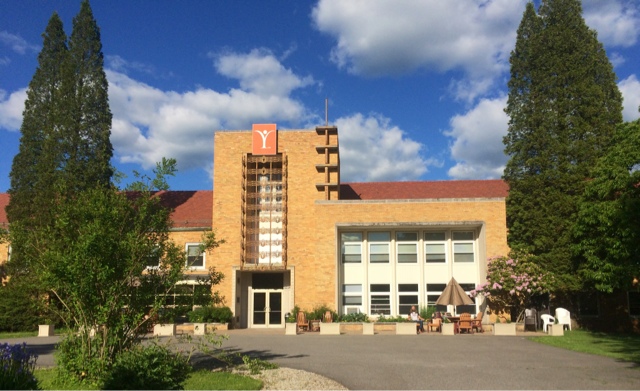 It's June 21st- Summer Solstice, international yoga day (I guess this is a real thing? I need to get out more!) and it's also day 5 of the 2017 Himalayan Institute 200-hour yoga teacher training. the Pennsylvania campus is the world headquarters and the HI has multiple campuses worldwide. 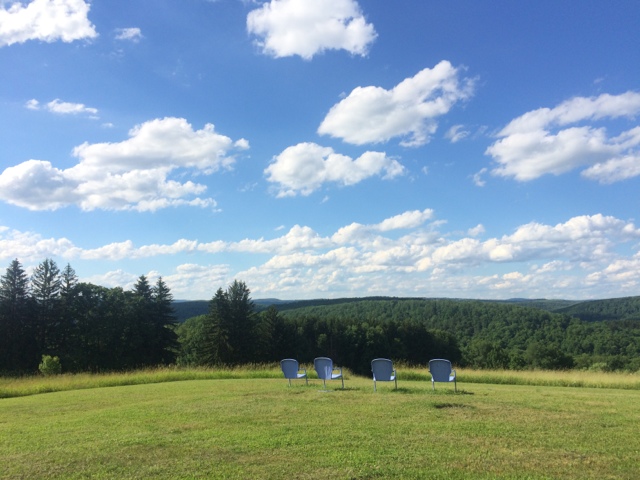 We are resting before supper time on a grassy hillside that overlooks hundreds of acres of Pennsylvanian wilderness. The crows and songbirds are abundant and summer weather has finally arrived.

The campus here ebbs and flows with human activity. It's typically something like a yogic beehive on weekends when extra programs are offered. It relaxes down to a peaceful, rhythmic buzz during the weekdays. There is a beautiful blend of seekers from all parts of the planet, and on any given day you will sense this worldly energy. Many languages, many lifestyles, many faces... all sharing one consciousness. The thread that weaves the diversity together is a seeking for higher truth. A greater understanding of existence. A longing for personal freedom, beginning deep inside. 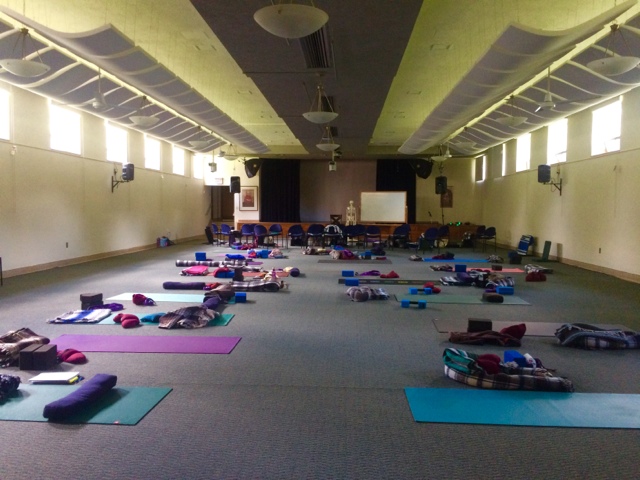 There are 17 of us teachers-in-training and just two are gentlemen. One of them is Tanner and the other is a very cheerful and kind young man from India. Age ranges from mid-20's to nearly 70 years wise. 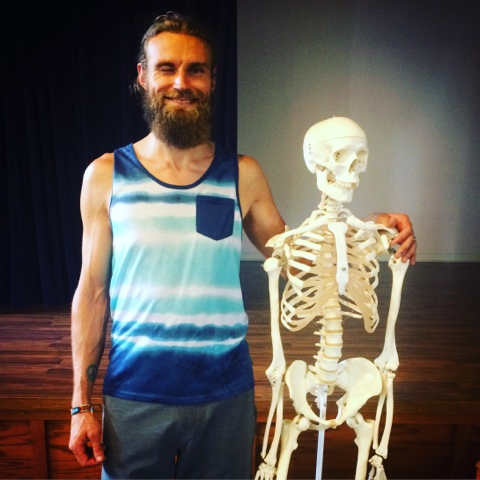 The approach and execution that this organization has designed for their students is like nothing I have encountered elsewhere. I spent a very challenging, transformative and dynamic 6 months here at the HI way back in 2003, at age 21. Over the last 14 years I have made massive changes to my own way of being and interacting with life, inside and outside. Yoga has supported me through it all. Many who have not experienced the breadth of yoga have a perception that it is simply an hour of stepping onto a mat and folding and stretching, and of course, wearing the fanciest yoga pants available. (Ok. I'm wearing my new tie-dyed leggings today...but seriously...)

The mat practice is just one slice out of the yoga pie.

The hatha or asana practice is like the bait that seems to attract the student with a stealth ninja-like cunning. It seems like a fold and a twist and a one-legged balance. But then...one day...something happens. A feeling. An awareness that wasn't there before. What was that? Did anyone else in the class feel that shift? Hmmm. Maybe there's more to this whole yoga thing. 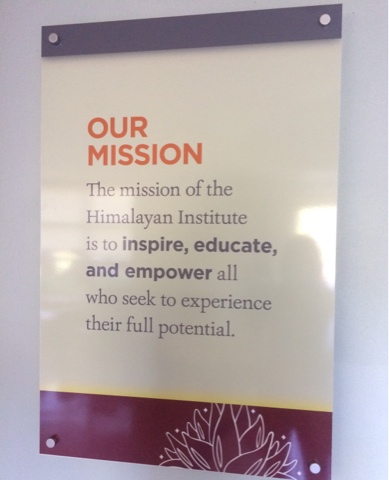 A different instructor leads our 6:45am hatha class each morning. The variety of styles of teaching is fabulous. Today I was moved to tears by the woman who led the class. The words that she spoke while she lead us through a sequence of postures and contemplation were connecting to a place so deep within my yet so infinitely vast.

I proceeded to eat my breakfast alone and just sit with what had transpired. I realized that I have not felt moved or inspired to this level in recent months. My inner light grew three sizes today.

At the conclusion of today's afternoon anatomy session, we were invited to share our personal shifts that have been a result of following our own yoga practices. I wanted to say many things, but what I ended up sharing was that I was so grateful to have discovered the yogic path nearly 15 years ago, and that it has been the foundation of me cultivating a knowing of deep inner peace. No matter where I am, or what is happening around me, there is an anchor deep within. Nothing outside of me has even come close to the inner guru that each of us has and is, if only we choose to hear the whispers of the guru. I've seen a saying that says "go within or go without".  Everything (and I mean everything) outside of us is only superficial and temporarily soothing or comforting tool. The infinite wisdom is waiting inside of us. Patiently. With love and compassion for our humanness to discover it. Namaste. Yup. I said it. And I meant it, too. 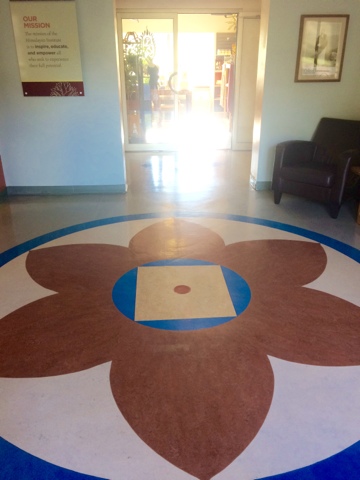 Posted by Unknown at 6:52 am No comments: Links to this post 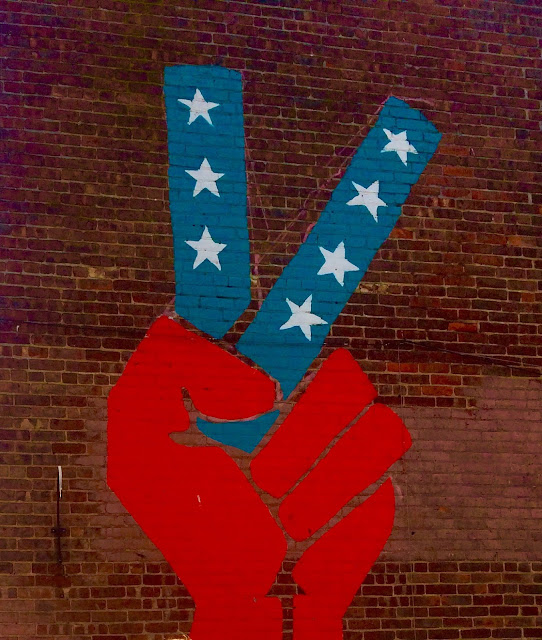 It's been an adventurous month crossing the USA. I have a few minutes while I await a dental exam (another one) to begin putting my thoughts into words here. To my dismay, a cavity that I had filled two months ago is very sore and so I wait for a seat in my least favorite type of chair.... 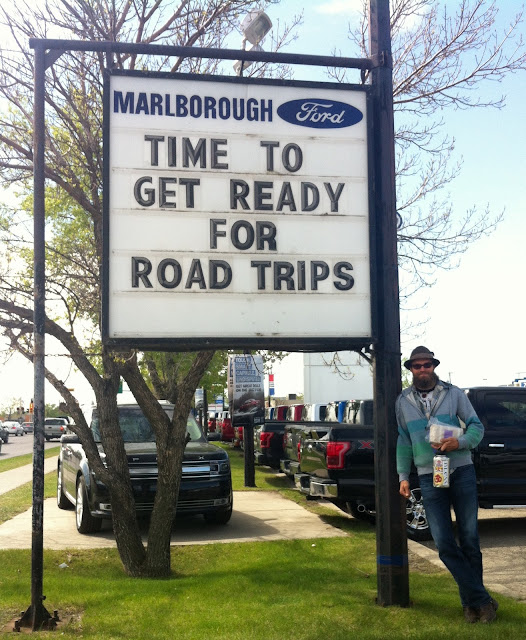 On a lighter note, it's been a beautiful trek across America, and just so our Canadian and global friends know: America is the same place it has been for a very long time. It's not suddenly evil. The people are generally kind and friendly - just like in Canada. The land is gorgeous and the wildlife is abundant - just like in Canada. Everyone is doing the best they can. Occasionally, we have spotted red, white and blue billboards, signs and bumper stickers saying "TRUMP: Making America Great Again". In my humble opinion, America IS great, but it has nothing to do with the politics. It's simply another incredible place on this earth, and the abundance of amazing human beings is what makes it greatest.

When we approached the border between southern Alberta and Montana, the guard looked at my American passport and said "welcome home". I smiled and said thank you, but also felt a bit funny because I haven't considered the USA to be my home in over a decade. 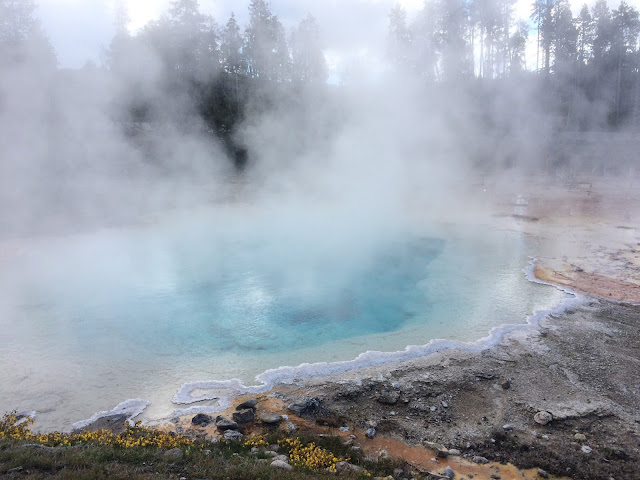 We made our way south to Yellowstone National Park in Wyoming. The geysers were so beautiful and bizarre. It was tricky to capture the true essence of their steamy mystery in photos.

Herds of bison grazed the foothills and elk and moose could be seen in the fields and forests. 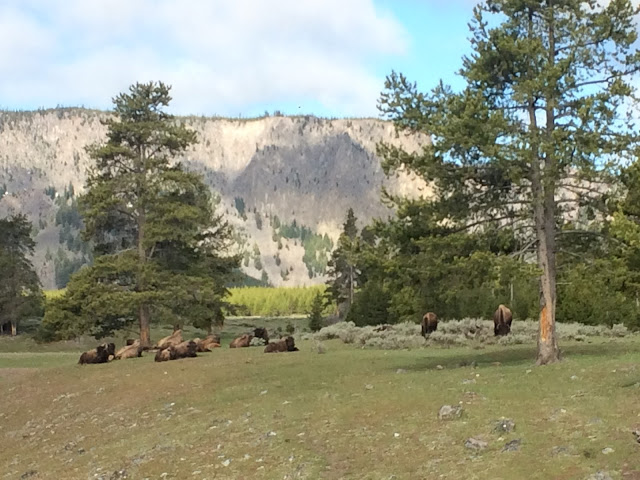 Heading into eastern Wyoming, we took a detour when we saw a sign that said "wild horse scenic tour". We drove for nearly two hours through the dry badlands on a high plateau overlooking prehistoric canyons with layers of colored rock shelves exposed from centuries of erosion. The roadside markers described what was believed to be a prehistoric ocean millions of years ago. Also we never saw a single wild horse...so that was a bummer. We had fun anyway! 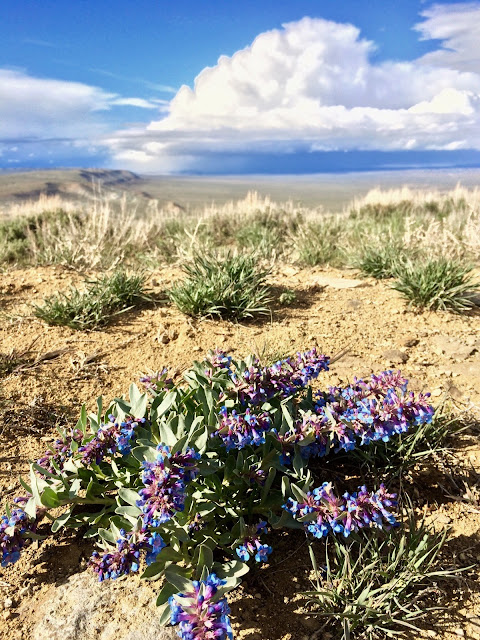 We had to do a last minute route change, due to an avalanche closure of a Rocky Mountain pass through northern Colorado. Instead, we went a bit south through Denver. As soon as we drove into the downtown area, marijuana was in the air. We parked and found a hip Thai bistro and has a great chat with the young man, perhaps 25 years old, who was the waiter.  He had spent a year in Thailand and was feeling obligated to remain in the USA because he felt that he would be throwing away his winning birth lottery of being born American. We smiled and suggested that he just do what made him happiest. He said the legality of marijuana in Colorado was causing a crunch in housing availability. Everyone wants to be a part of the cannbis revolution. He mentioned that he was observing the current generation's new American Dream: have a career that allows you to be your own boss and live anywhere you want to. We said that is precisely what we are aiming for...

We downloaded an excellent audiobook called "Stop Saying You're Fine" by Mel Robbins. It's SO good. She is a no-bullshit kinda gal and is a former lawyer, who now has an inspirational radio show. It is full of great stories and tips to inspire even the most stuck person into just doing anything, rather than nothing to make a change in their lives. We took notes as we listened day after day while traversing the corn and wheat belt of the American Midwest. We found this gem of a park to camp in, right in the middle of Kansas. We saw the name on our atlas (yep, we have a vintage paper atlas) and just knew we wanted to camp there. It was beautiful. 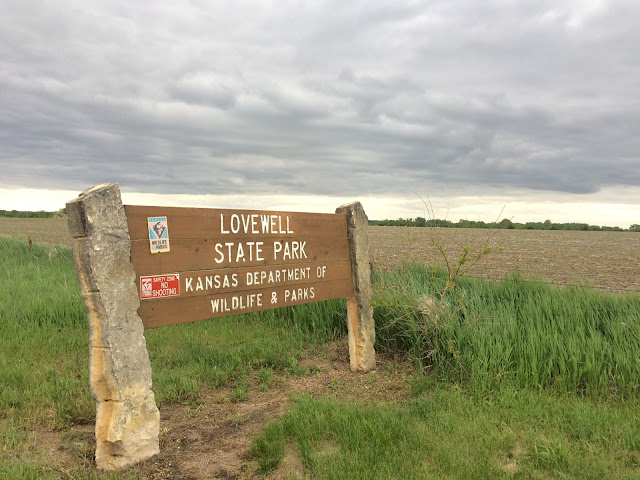 We had a lovely weekend with my older brother, who is an air traffic controller. He wanted to take us into his center and show us the behind the scenes of his job, but they said no Canadians allowed in there. So much for that. America's air security is seriously serious. 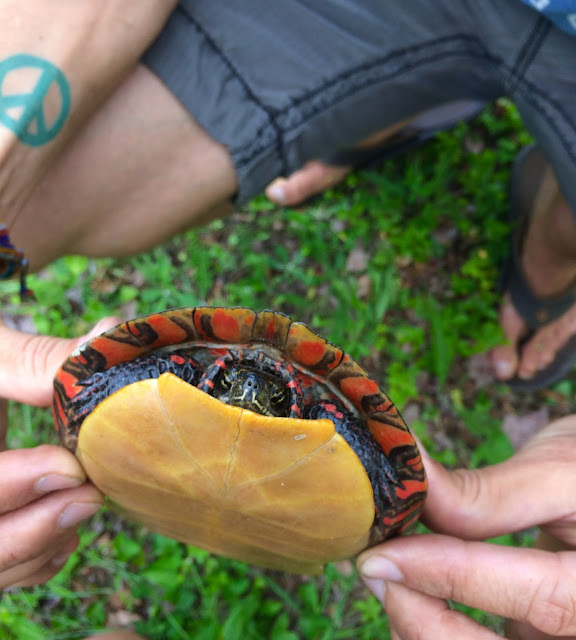 So we made it to the east coast. We are currently visiting my dad in rural northeastern Pennsylvania. It's so beautiful here. We have been getting up and going for a long morning stroll around the neighborhood where I grew up exploring forests and streams. We saw a family of red foxes and found this turtle in the yard today. A pair of robins built a nest on top of a Christmas wreath that I hung for my dad over a year and a half ago next to his front door. 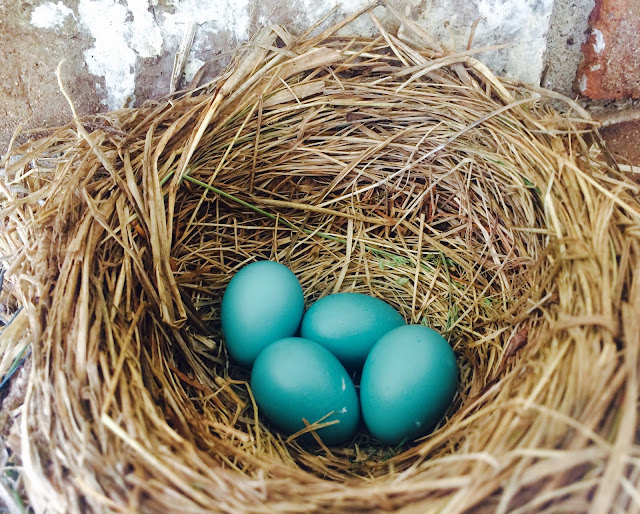 We harvested a ganoderma tsugae mushroom, a type of reishi that grows on hemlock trees here. We dried a big one for tea and Tanner sautéed a chunk to enjoy fresh also. He said it was delish. 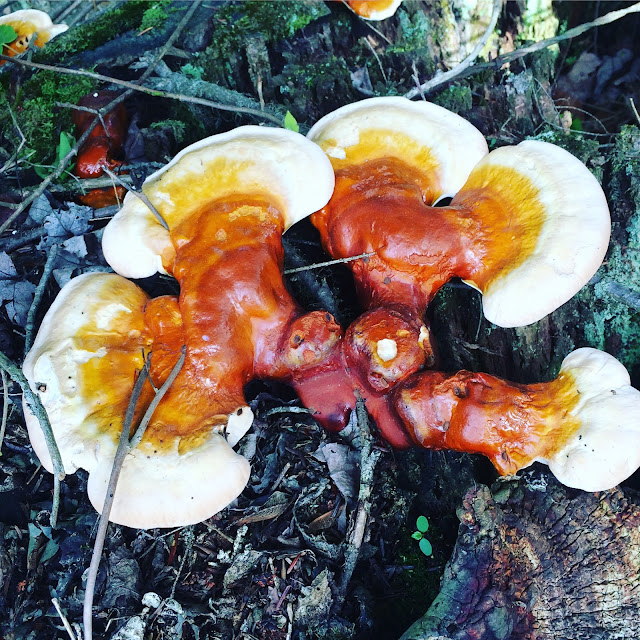 We made a visit to the Himalayan Institute last night for supper and a kirtan, Indian devotional chanting. It was a wonderful visit and in one week we will begin the 200-hour training to become certified yoga instructors. We are very excited. 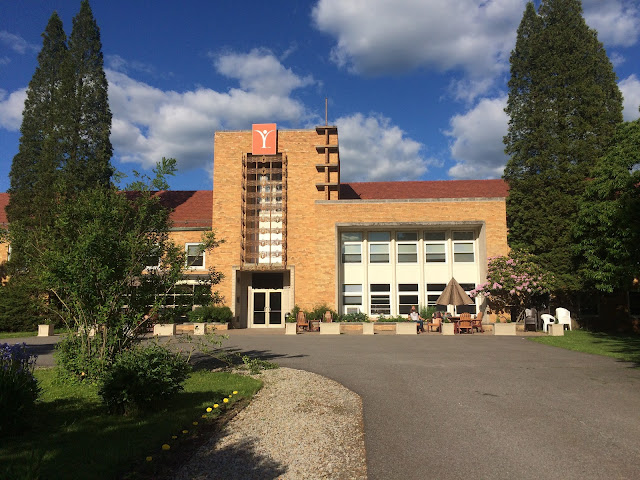 Front entrance at the Himalayan Institute in Bethany, Pennsylvania

Posted by Unknown at 9:07 pm No comments: Links to this post