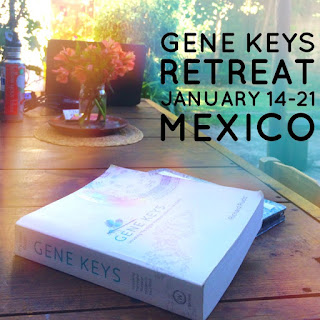 We are currently working through a section of the Golden Path study program called the Venus Sequence. It is all about how we show up in our relationships through this lifetime. It is so powerful that it is hard to describe.

In one of the steps, we dove deep into the concept of Divine Grace. I suddenly had a recapitulation of 2017 through a lens of Grace. I jotted down all of the moments in the last year where I was stopped in my tracks by something or so deeply moved that I felt a deep shift in my life. I will share these magical occurrences with you and I hope that you will take some time to recollect your own moments of Grace from 2017...as each of us can only experience what Grace means for us as a unique individual soul.

Here we go- in a roughly chronological order:

Obvious first stop Is the Gene Keys themselves. They launched me into 2017 from a space of self-awareness that I had never known before.

Song downloads: I have had several songs come to me this year and I am reminded of my deep lifelong passion for using my voice to transmit love and magic through song. It’s been a loooong time coming back so I look forward to sharing. I used to be in the school choir for 11 years and when my family became church-goers in my high school years, I made the most of it by joining the church choir. In my early 20’s my former partner and I recorded awesome upbeat cover albums for his mom each year for her birthday. My love of singing had gotten lost in the seriousness of life and is slowly returning to me.

Speaking of Music: Oliver Swain. Something about this guy and his musical channeling ability is simply magical. I will let you look his albums up yourself. Folky funky charming melodies. He has a brilliantly co-created Leonard Cohen tribute album also. Amazing. Sitting in a few live performances was completely hypnotic for me.
Annnnnd....
Nahko and Medicine for the People: This group of guys has a deep and beautiful connection with each other and such a smooth flow amongst them. We were blessed to be at two of their live performances in July and October in the USA. Four times in two years and I look forward to the next. Their album HOKA has been a soundtrack for my life over the last year and a half. Enjoy.

Cacao ceremonies: Sooooo many moments of Grace have occurred at these beautiful gatherings of human hearts and souls. One group of moments that stands out was in April this year. It was our final ceremony in our home community on Vancouver Island. I was so caught up in the planning of where we were heading out on road trip of undetermined length...that I was really touched deeply when our friends shed tears that we would soon be leaving the tribe and the uncertainty of when we might return left a void that night. I knew that all I could do was feel it and know that there was nothing I could say or do to change that deep tethering of human hearts and auras. I still feel all of those beautiful people with us on this journey. You know who you are!!!

Yoga teacher training at the Himalayan Institute in Pennsylvania: I returned to my roots and my original yoga home and family after 14 years of being away. It was so powerful to return to my hometown and dive into the depths of my truth and beliefs about life itself. I went through such a powerful shift at those 22 days of yogic metamorphosis. I will be eternally grateful for witnessing the change in myself and the other 16 students who shared that priceless time with me. Including Tanner. Wow. What a gift to have shared such a powerful and graceful experience. 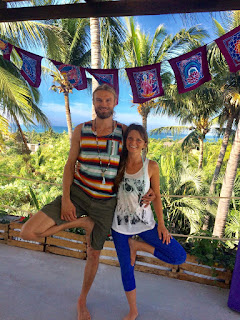 A single conversation with a soul mate: That day was so pivotal for me. I don’t even think he knows how profound it was. I didn’t make it about me though. I knew there was a message that he needed to receive directly from me to unravel our karmic past and free us both up to move forward on our separate paths. This person and myself have had a powerful soul connection for 16 years and we will remain connected into infinity. However, the day this summer when I told him that he was one of the most incredible humans I have ever known and that he was doing the world a disservice by not sharing his whole heart by avoiding deep, beautiful relationships, was so profound for me. We have had a beautiful sharing and clearing over the last few years and Tanner has been such a big part of allowing this karmic settlement to unfold. We are soul family from the same tree and it feels as though it is our role to support and encourage one another to fulfill our individual destinies in this lifetime. With or without each other. What a blessing the people in my life have been. It continues to amaze me.

Being offered management of a retreat center on the beach in Mexico for the winter months: Didn’t see this one coming. I could write 10 blogs about it so far after four months of planning, and the retreats still don’t start for two more weeks. It’s been one of the more intense schools of life so far (probably in my top 5) planning and preparing for holding these powerful retreats for supporting human transformation. The universe is making sure that we are fully rooted and prepared for this!

Connecting with my uncle after 23 years: My dad asked us to swing by my aunt and uncle’s place in Dallas on our way to Mexico to deliver some priceless vintage family photos that we had just sorted and labeled with great care. I was highly reluctant but I knew it was part of my dharma to make new impressions on a wounded family tree. We only visited for one evening but it was a super powerful evening. I asked him many questions about his life and about my dad (they are brothers) and about their childhoods. He told me how grateful he was to discuss his ex-wife and his children who are now grown and how these things are not normally discussed by his family. He just turned 80 years old and he is one of millions in that generation who have had little or no opportunity to work through and come to terms with the core wounding that has been passed on through countless generations. He said to me something like: For someone who never went to university for a degree, you seem to have an incredible view on life and your experiences are so wonderful to hear about. Keep doing what you are doing. He has a PhD in something. I don’t even know what. They wanted us to stay for more time but Mexico was calling and a short and potent visit is often the most profound.

A 3 month old Mexican baby with huge blue eyes: His whole family operates a coconut tent on the side of an extremely hot and sweaty stretch of highway between Puerto Escondido and San Cristobal de las Casas. We met them twice. Once on each end of a two week trip to Chiapas in November. I don’t know exactly what it was about this baby. But his 11-year-old cousin handed him to me while I waited for a cold fresh coconut water. We stared into each other’s eyes and his smile was so huge that it lit me up on the inside. I told him he was welcome to visit us in Canada someday when he was old enough. We paid for the coconuts and I jokingly asked how much they wanted for the baby. I don’t think they thought it was funny. Cultural humor gap. Also a moment of slight awkwardness. Mostly Grace though, mostly Grace. 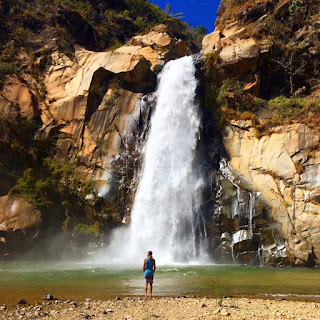 A magical waterfall that we visited in rural Oaxaca: The power of falling water and the rhythm of the waves at the impact point, combined with the constant roar and the misty rainbows at the pool below created a deeply moving experience for me. Twice. We will return again before long.
On Christmas Day, we trekked up into the wild hills to spend our day there.
A beautiful song came to me and so I wrote it down. When I work up the courage to record it, I will share it with the world. The title of the song is “This is Life”.


Lastly, on New Year’s Eve morning, I was preparing to hand-wash some laundry and hang it to dry when I stopped in my tracks. There was an incredible rainbow bird the size of a crow sitting on the clothesline on top of a purple towel that was hung out to dry. I watched him intently as I slowly stepped closer. His head was a reddish and the tip of his long tail was blue. He was the most magical wild bird I have ever seen. The rainbow gradient of colors along his body just dazzled me.

I knew this moment of Grace was a very good omen on the last day of an incredibly powerful and transformative year. 2018 is sure to be full of Grace beyond measure. I look forward to telling you all about it...one year from now.

Please share these blogs with anyone that you feel may be inspired by my stories. 2018 is going to be amazing. A vast ocean of possibilities lies ahead of all of us and we must simply clean up our boats and surrender to the waves of life. ANYTHING IS POSSIBLE. Can you open up to a more magical life?